Heritage in a nutshell. A stroll around Sydney: Part 1 St Andrews, Town Hall & the Queen Victori

There are various ways to undertake a heritage walk of your home city. One of mine has been to print out copies of old maps (Doves Maps of Sydney 1880), and then see if I can find the locations that were a hive of activity 130 plus years ago. This is the first in a series of “quick dips” into Sydney built heritage. I’m starting with Town Hall Station. One, it's on my train line so easy for me to reach and two, it's central to the major heritage buildings in the city. Following articles will explore the Australian Museum and Hyde Park, the Royal Botanical Gardens and Government House, Sydney Opera House and Circular Quay, into The Rocks, and then back toward Central Station. These are all my favourite places to wander. Here and there, I’ll make a few surprise stops, and each article will come with a copy of the Dove Map for that area where possible.

Put your walking shoes on and let’s get started! 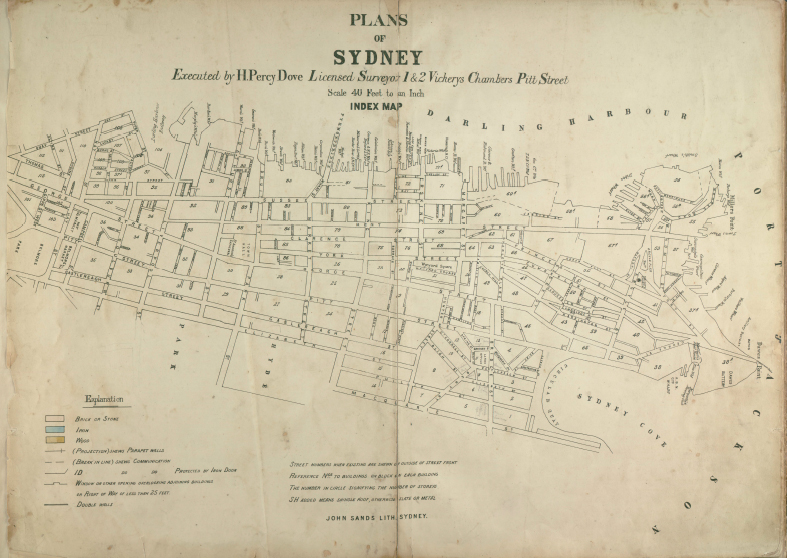 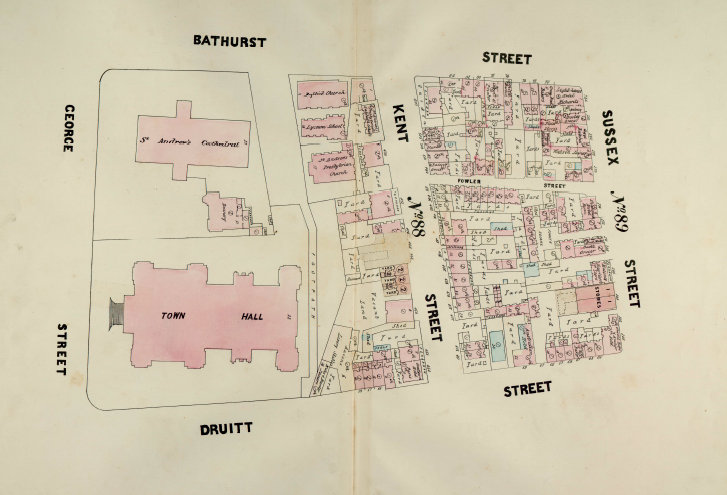 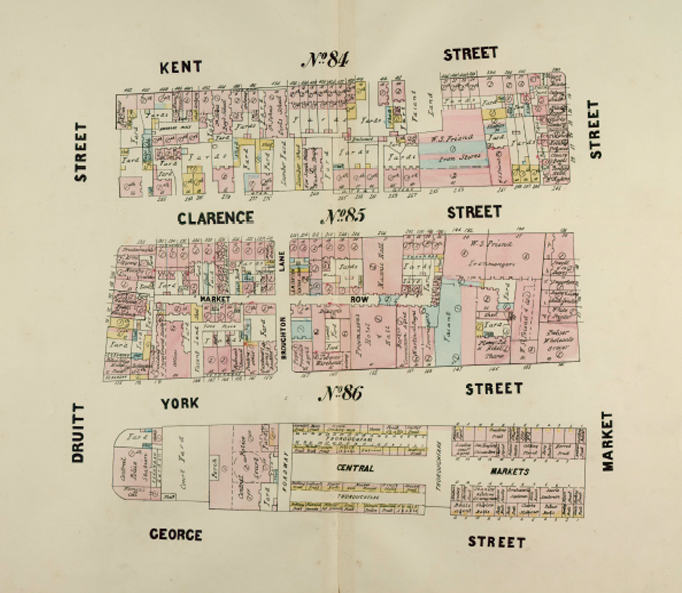 Above: Henry Percy's Plans of Sydney 1880

Directly above Town Hall train station is St Andrews Cathedral and the home of the City of Sydney Council, Town Hall. 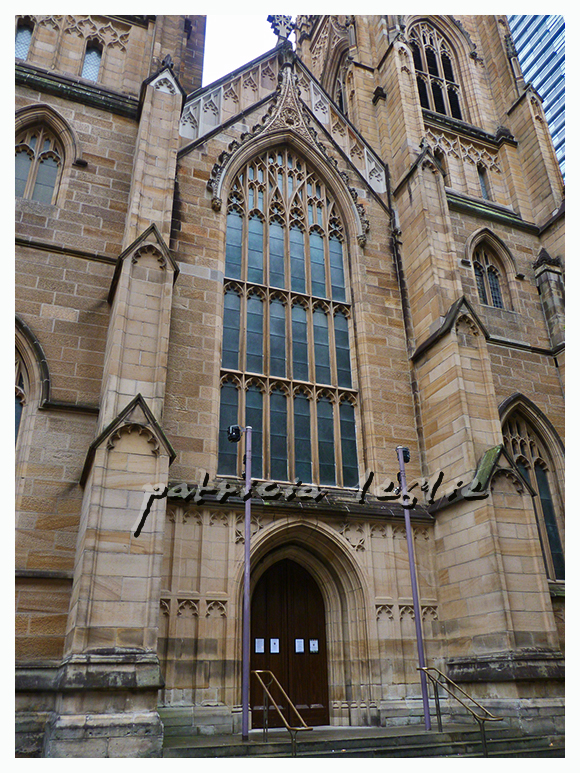 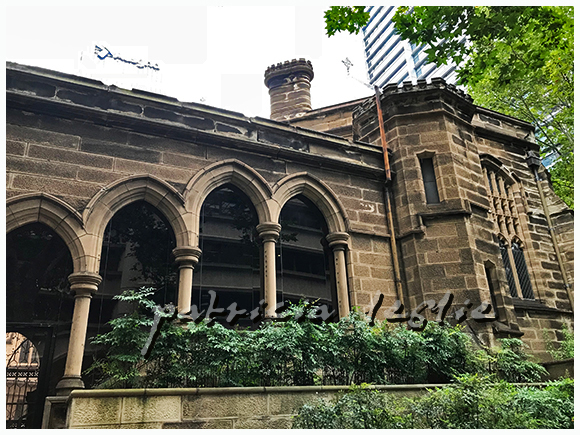 The Gothic Revival cathedral (original architect: Francis Greenway) was built over a period time, 1837-1868 though the first foundation stone was laid in 1819 by Governor Macquarie, construction stopped in 1820 and didn’t restart until 1837. Another foundation stone was laid, this one by Governor Bourke, and a single tower building (designers: Bishop Broughton and James Hume) was underway. It halted again in the early 1840s due to economic depression and a subsequent lack of funds. A new Church Architect was appointed, Edmund Blackett in 1846 and it was full steam ahead until completion and consecration on St Andrews Day, 1868. Though with a few re-dos and additions on the books, the cathedral kept builders busy until 1960.

Town Hall was designed by JH Wilson, and built on the site of the Old Sydney Burial Ground (which had closed in 1820). Many of the graves were reinterred to Rookwood Cemetery, but rumour has it that ghosts of those that were missed walk the corridors and lurk in the gallery…. Or perhaps they're the ghosts of former councillors and Lord Mayors! Certainly, graves have continued to be found during excavations and construction works in the area.

An interesting little museum has been developed and I highly recommend visiting during one of the Sydney Living Museum Open Days so you can explore inside and access the clock tower (great views). The tower was completed in 1881 and has been a prominent landmark ever since. The interior is a mix of styles linked by the heritage hallways and architectural elements. The Lady Mayoress’s room is beautifully restored and holds a collection of various gifts to the First couples of Sydney over the decades.

Back outside to Druitt St and you might notice on the other side of the road a statue of Queen Victoria, a bronzed dog and a little building known as the Queen Vic or the QVB, and designed by City Architect George McRae around 1893. The building was named after Queen Victoria to celebrate her diamond jubilee.

QVB replaced a produce market and the Central Police Court. It’s been through a number of uses, refurbishments, and restorations since its opening including . A major one in the 1980s saw its then sad interior reconstructed to give the atmosphere and décor of the grand Victorian arcade it was designed as, with further restorations opening in 2009 to arrive at the beautiful building it is today. The original building contained shops, offices, dancing, elocution, and art salons as well as a gymnasium for ladies, a table tennis hall, and a billiards saloon (billiards halls were very popular throughout the 1800s).

The café inside the Druitt St entrance is pretty good. The food always looks lovely. Another favourite is the Old Vienna Café upstairs at the Market Street end. But enough about where I like to go for coffee and cake. If you happen to be at the QVB around Christmas time, do go and see their spectacular Christmas tree! Catch their heritage-style elevator up to the top floors to see the clock and look around the beautifully recreated interior.

I took the above photo looking up into the QVB Christmas Tree.

Swarovski Crysals certainly add a touch of dazzle to the decorations!

Exhaustive research (that is a quick search and stop off at Wikipedia) provides the info that the statue is on loan to Australia from Ireland, and was restored and installed in 1987 to celebrate the reopening of this landmark building.

Heading down George Street and you may find it difficult to inspect the exterior of the Queen Victoria Building and not tripping over the roadworks detritus or bumping into other people squeezed into the narrowed footpaths. It will all be over soon (I hope) and we’ll be able to gawk at the building and walk without tripping. At least, there’s not much traffic….

You can spend a couple of hours exploring the QVB inside and out (especially if you stop for coffee), but as this is a quick dip into the city’s heritage, I’m moving right along. Keep up and follow the flag…

Park Street will take us up to Hyde Park and the Australian Museum. If you’ve wandered into the QVB and not sure which way you’re facing, find the statue of Queen Victoria entrance and Town Hall. Put the Queen at your back and Park Street is more or less in front of you. If you cross the road on the diagonal and turn back to QVB you’ll be able to reflect (just for a moment, it’s usually a busy intersection) on the now and then…

Since the first tree was planted, Hyde Park has been known as the Sydney Common, Government Domain, The Common, The Exercising Ground, Cricket Ground, Racecourse. It was also used as a camp by Aborigines (one of many around the harbour), and a place for people to stand on their “soapbox” and share their knowledge, philosophy, and complaints to anyone who happened by.

Come back again soon and I’ll share some more of my wanderings in a nutshell: Hyde Park and the Australian Museum.

"a significant new artwork by Aboriginal artist Tony Albert to acknowledge Aboriginal and Torres Strait Islander men and women who served in the nation’s military. "

Sydney Town Hall: the building and its collection by Margaret Betteridge

Queen Victoria statue outside the QVB

Love in the time of Cholera, Covid-19 and Social Distancing

What I've been reading